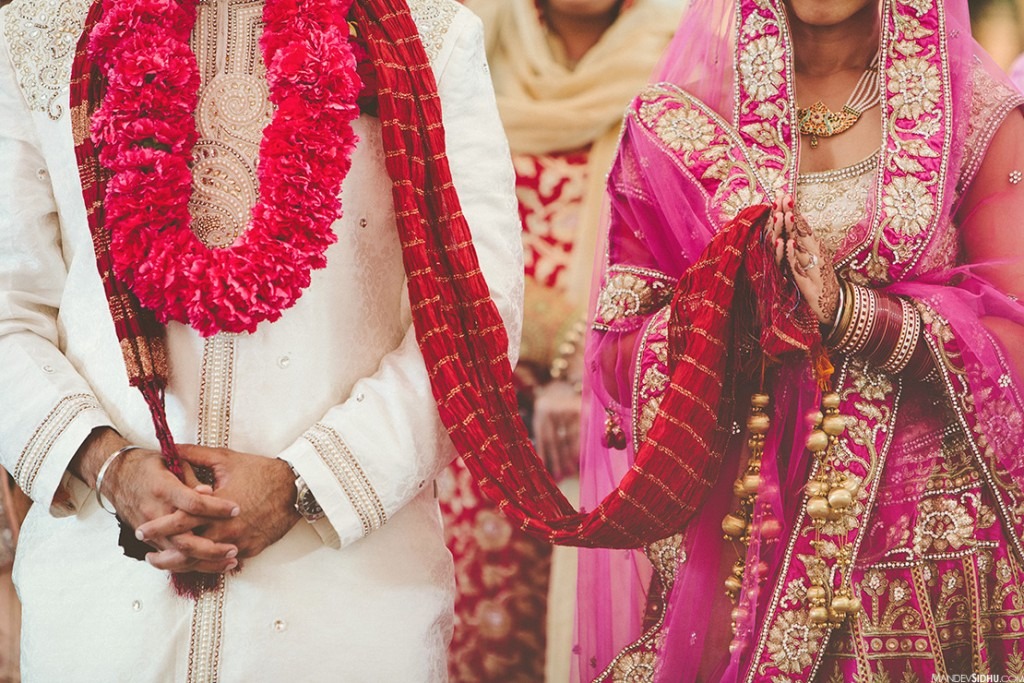 Having been to quite a few (including my own), I’ll start by saying that Sikh Weddings tend to be colourful, happy, energetic and BIG events with lots going on, so here is the Big Fat Sikh Wedding Guide, covering all of the Sikh wedding traditions! 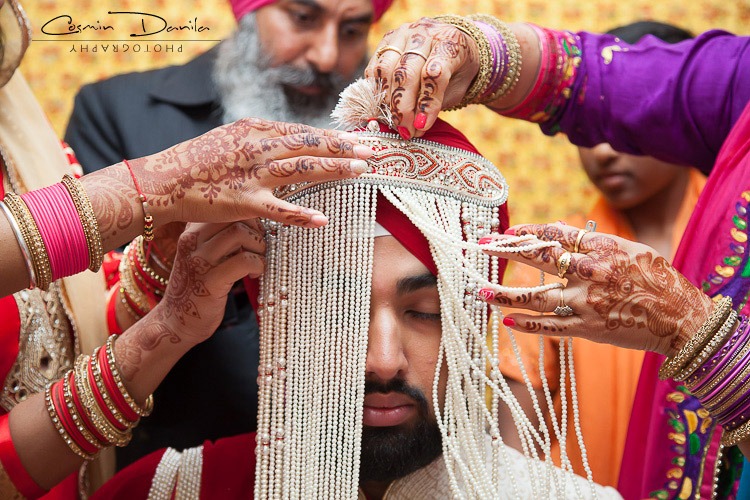 The groom’s sister-in-law applies a black dot of kohl or surma on the side of his forehead to ward off any negative energy from the groom. The sister of the groom then ties a piece of jewelry on his turban and stands between him and the door. She demands gifts in exchange for letting him go to the wedding. The groom has to present her with a gift before he can leave for the wedding venue.

Traditionally speaking, the groom is supposed to travel to the bride’s place on a mare. Nowadays, the groom takes a car for the most part of the journey and before entering the wedding venue mounts the mare, which is decorated with golden ribbons and other trimmings. Relatives and friends of the groom accompany him to the wedding venue. Music and Bhangra dance is an integral part of a Baraat. Generally, a band is hired to provide the music to which the Baraatis dance. Anand Karaj literally means ‘Blissful Union’. The ceremony takes place at the Gurdwara prayer hall during the daytime or during afternoons. The Guru Granth Sahib is placed at a site of prominence and the marriage ceremony is designed around it. The bride and the groom sit side-by-side – bride on the left side of the groom, facing the Guru Granth Sahib. The ceremony starts with the couple and their parents standing up to offer Ardaas to ‘Waheguru’, after which singing of Shabads or hymns is done. The marriage can be performed by any Amritdhari Sikh that is someone who had undergone the Amrit Initiation in Sikhism. He explains to the couple the significance of the marriage, the duties that each need to perform within the sacred relationship, and the general idea of leading a pious life according to Sikh tenets. The couple then bows down before the Guru Granth Sahib. The father of the bride places a saffron coloured scarf on the groom’s shoulder and the other end of the same on his daughter’s hand. Thus, they are joined and ready to take the Lavaas or vows of marriage.

The person conducting the marriage recites the four Lavaa or stanzas from the Guru Granth Sahib. After he has completed reading the first stanza, the couple rises from their seats and slowly walks around the Guru Granth Sahib in clockwise direction, with the groom leading the bride. After completion of the round they come back to their positions but remain standing for the remaining three hymns. The process of circumambulation is repeated three more times after each Lavaa. The raagis sing the Lavaas in the background while the couple performs the Pheras. 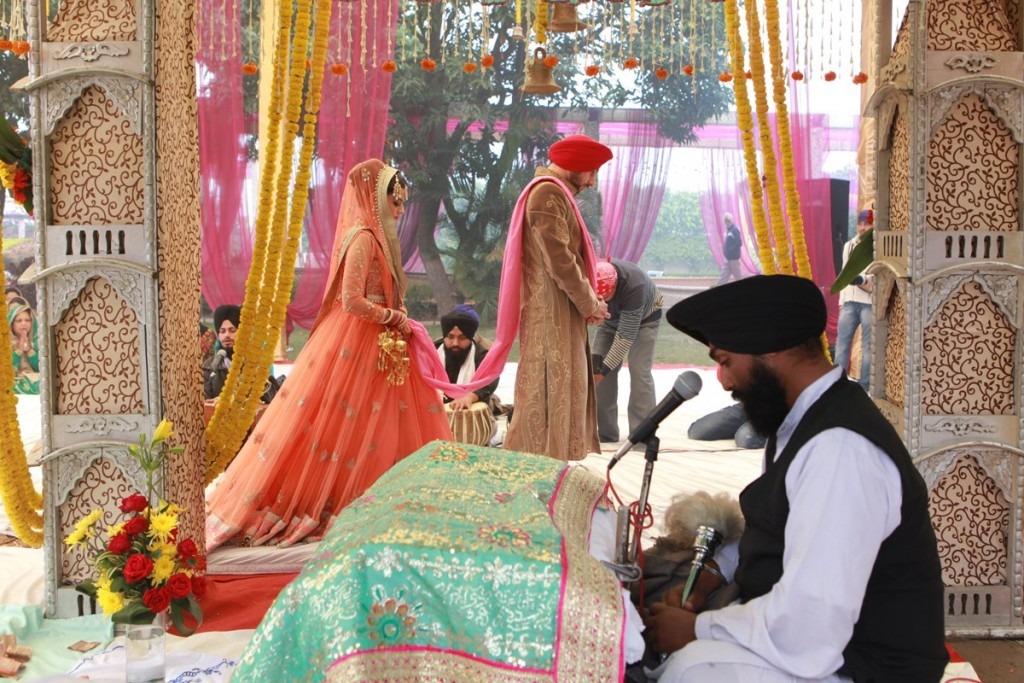 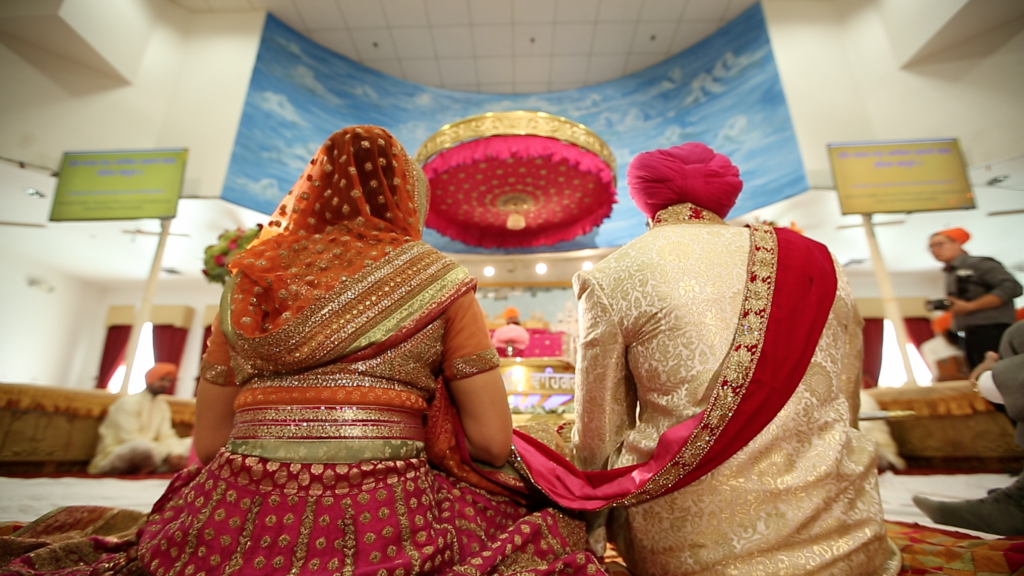 After completion of the Lavan Pheras, the raagis sing out the hymns of Anand Sahib. An Ardaas is offered as an indication that the wedding ceremony is now complete. A random Hymn from the Guru Granth Sahib is chosen to be recited while Khatah Prasad is distributed among all the attendees. 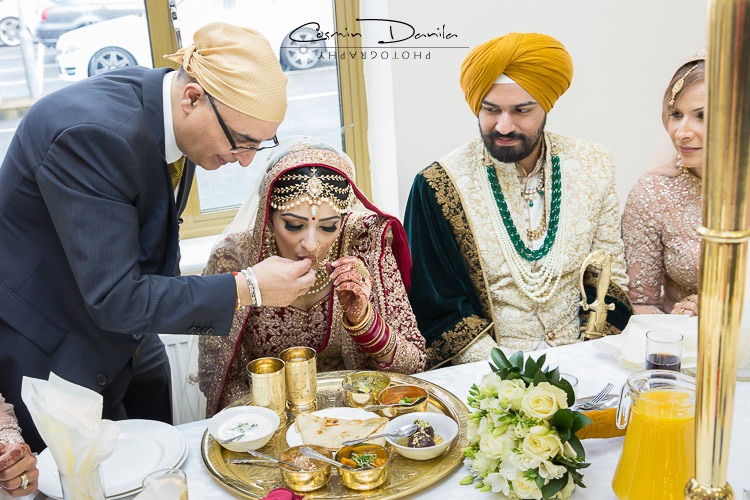 LWedding Lunch – At the end of the wedding ceremony, the guests and the attendees are served delicious vegetarian lunch at the Gurudwara’s congregational hall. Thereafter, a ceremony called Roti takes place, which signifies the bride’s first meal as a married woman. Her in-laws cover the platter with a cloth and present it to the bride along with some cash gift. The bride shares this meal with the groom.