Typically, a Sikh / Punjabi wedding will have a number of functions that precede the big day, some cultural, some religious and as a result it can be daunting to comprehend what comes first, next and so forth and what’s involved! I can still recall my mum frantic with worry in the lead up to my wedding, not quite knowing what was expected, this despite having received lots of contradictory hints, tips and to do lists from my many aunties. To help you avoid this situation when it’s your turn, we’ve put together the ultimate, but brief, Big Fat Sikh Pre-Wedding Guide! However due to the myriad of traditions and customs that exist we might have missed some (blame the aunties) if we have, then do please let us know!

This is where it officially begins, even though you may have met right here on SeekSikh.com, on that wonderful day which will forever be etched into your memories! On a serious note, this is it, the unofficial engagement ceremony, traditionally a simple affair that takes places once everyone has hopefully said hanji. The groom’s family and friends (optional) gather to give presents, money and blessings to the bride to be. In addition it’s customary for the mums to force feed ladoos to everyone, especially to the happy couple. At this point rings are not normally exchanged, however the couple are now officially engaged and can now openly date without the aunties gossiping. This marks the beginning of a relationship between the two families who now collectively start discussing a wedding date. 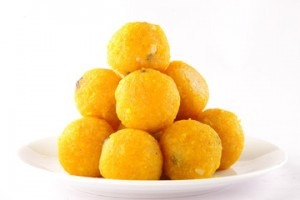 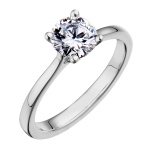 So the unofficial engagement has already happened, it’s now time to formalise it, hello Kurmai! The Kurmai is typically performed at grooms place or gurdhwara

Family members are invited and groom presents the engagement ring. This is also when the brides family members offer kara (sikh steel bangle) to the groom. Engagement ceremony is started with a short prayer by granthi (sikh priest). After which red scarf is placed around the grooms shoulder along with dried dates according to granthis instruction and then grandfather feeds that dried dated to the groom after which food and drinks are enjoyed by all

We’re getting closer to the big day, however a few ceremonies / rituals remain. So on to the chunni, which is unlike the Roka, recognised as the official engagement! The venue is most often the bride to be’s house, but if you have excessive amounts of money, then of course you can hold it wherever you want.

The grooms family attend with with close family and friends, and bring a variety of gifts that typically comprise of a fruit basket, Indian sweets (mithai), as well as a complete outfit for the bride to be, jewelry, cosmetics and the all important red chunni, without it it simply wouldn’t be the chunni ceremony!

The grooms close female relatives, typically the sister or bhabhi present the bride to be with the outfit, which is traditionally red or red-ish and symbolically may help the girl to get dressed and apply some of the makeup, of course to what extent is entirely up to the bride, in the present day it would normally be the bride to be’s family and friends that would assist.

Once ready, the bride to be would join all of the guests, and sit beside the groom to be, and it’s then time for the chunni charauna which is traditionally performed by the boys mother, who covers the brides head with the chunni. It could be a simple or very flamboyant the choice is yours but ensure it’s red! Some families, maintain the chunni as a heirloom and it’s passed down the generations. The boys mother may also dab some henna on to the girls palm for luck, followed by women from the boys side embellishing the girl with jewelry, whilst the boys father places handfuls of dry fruit in the jholi. Some families may expect the boy to put sindoor on the girl, however this is a Hindu tradition and not strictly followed by Sikhs. Once all or most of these time old traditions have been performed, it’s time to put the engagement ring on the girls finger, on occasion the girl may also present the boy with a ring (as in my case) and then you’re officially engaged and it’s time to feast out on ladoos, gulab jamons and any other mithai your family members can force feed you then time for a party!

You might be wondering what the chunni ceremony represents, well quite simply it signifies that the girl has been accepted by the boys family and is responsible for maintaining the honor and pride of her in laws. 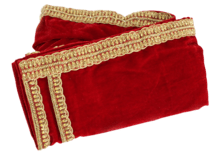 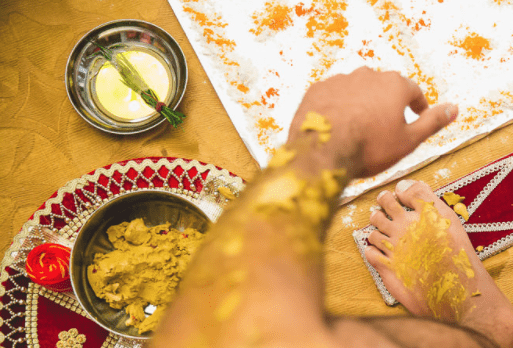 This is the one where your loved ones relish the opportunity to smear you with ‘Vatna’. You might be wondering what this is, well essentially, it’s a dough like mixture consisting of turmeric powder, flour (besan) and mustard oil and in case you’re wondering what it feels like. It’s greasy, very greasy. However, there’s more to the Maiya ceremony and we’ll cover that now.

The Maiya ceremony, customarily takes place a few days before the wedding and is often held in the morning, whilst this the ‘norm’ different families have different customs and I was recently at a Maiya function that took place on a Friday evening. The purpose of the Maiya is, quite simply to ‘beautify’ the couple. The Tumeric in the Vatna, is apparently quite good for the skin and helps to clear scars, pimple, acne, reduces oil secretion and provides a youthful glow! If I had know this when I had my Maiya, I would have smeared Vatna all over my face. If we all followed tradition, once covered in Vatna, you’re not meant to change clothes, take a shower or leave the house until the wedding day, however not many abide by this tradition. So now that you understand the reasoning behind the ceremony, let’s establish the steps that lead to the ‘smearing’.

Firstly, friends and family will create a rangoli design in the garden or patio of the wedding home, the ingredients to make the rangoli are simply flour, rice with some powdered food colouring. The design can be simplistic or sophisticated, just ensure you assign a creative person as the lead! Beside the rangoli you place a stool (peerhi) for the girl or boy to sit on in preparation for the smearing, alongside a ‘fatti’, a rectangular piece of wood for them to place their feet on when seated. In readiness for this, the Vatna is prepared and placed on a decorated tray (thali) alongside some read threads (gana) which are to be tied on the wrists of the guests. The bride or groom to be are handed the tray and carry out along with a ‘dupatta’, an Indian scarf which will be held up above the girl or boy, from all four corners when they are seated.

Once seated, the dupatta will be held over the girls head from each corner and the elder women of the family or friends will start singing a variety of traditional songs, quite badly from experience, the voices will be out of tune and there will be disagreements over song choices. But settle in, depending on the number of guests you have, it could be quite a long session as relatives and friends start forming an ‘orderly queue’ to apply ‘small’ amounts of Vatna to the face, hands, arms and feet. Typically there’s a photographer snapping away, so keep smiling!

When everyone’s had an opportunity to apply the Vatna, the dupatta is bundled up and placed for a short while on the brides head and mother or other close relative will give ‘shagan’ of yellow sweet rice. After this, you can stand up and leg it to the bath or simply wipe off and carry on with the function. At the end of the ceremony the mother or another close female relative will clean away the rangoli design with her hands and water, and before washing the hands the colour from the rangoli will be stamped on to the homes outside wall 5 times. You may be wondering what this represents. So am I.

Time to literally get the party started and start screwing those light bulbs, approx. two days prior to the wedding! Traditionally the Mehndi and Sangeet were two separate events and primarily for the ladies, whereby they’d play music together and have a good old singsong, however time moves on and the men (and boys) want to chak de phatte so they can get involved, not necessarily in the mehndi, just the chakking de phatte. Although this is still predominantly a function for the ladies and children.

Typically the sangeet begins with the singing of some traditional folk songs, to be specific, suhaag on the brides side and kori’s on the grooms side. Once the traditional songs are done with, don’t be surprised if some of the songs get a bit naughty, with some laughs at the expense of close family members.

During the event, mehndi (henna) is also applied to the bride to be, although (rarely) the groom might also want some applied too. They belief is that the longer it’s left on the stronger the love will be and the darker it turns out the better the relationship between the bride and mother-in-law. But we’re not superstitious and you shouldn’t be either! 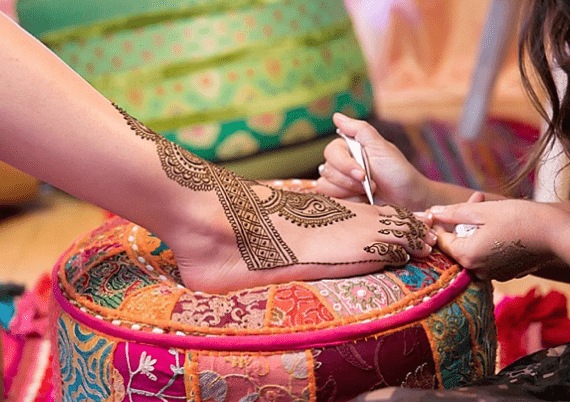 We have to admit that this is probably our favourite pre-wedding event, it’s the one where it’s time to blast Malkit Singh’s ‘Jaago Aaya’ and literally wake up “jaago”!

This will be the last chance to party before the wedding and the ceremony typically takes place on the night before the wedding, but if you’re risk averse and want to be able to stay awake for the wedding itself, then it might be an idea to leave a day in-between to recover… I wish I had!

The jaago begins with another MAIYA ceremony, the aim being as before. Bring towels / wet wipes.

The tradition is for the maternal family to bring gifts, also referred to as ‘Nanki Shak’. Historically, the mama(s) maternal uncles, would have purchased the bride or grooms wedding outfit, perhaps even the jewellery, however this is becoming less common. Unless you have very rich and generous nanke.

For the brides side, one of the big items on the Jaago tick-list is the chura ceremony, whereby the maternal uncles and their wives place a set of red and cream ivory bangles (chura) on the bride, having first ensured that they are touched by all present (so that they can give their blessings) and that they have been dipped in a milk / water mixture. Traditionally the bride would wear the chura for a significant amount of time i.e. a year, that rarely happens now as it’s not really practical.

Following this, the bride is dressed in a red chunni and the nanke present the her with jewellery which could be gold or silver, this represents the wedding gift from the maternal family. At the end the uncles and aunts are given milk to drink.

Once that’s done we’re on to the part so time to get your Jaago on. The significance of this is that in time gone by the relatives of those getting married would literally invite people to weddings by going around wearing the pots on their heads, complete with oil candles singing songs like “Jaago”; “wake up” and join in!

In the modern day the “Jaago” has not changed hugely, it still features the pot, although the oil candles are being replaced with LEDs (thankfully) and everyone is singing, dancing and spinning Jaago sticks around. Rather than being an outdoor event around the neighbourhood the venue now tends to be a marquee or hall.

Party hard, but not too hard because wedding is now literally within the next couple of days!